springlocked
Whatever came after that was a blur. Days, weeks, months… I don’t know how much time has passed.
It all felt the same.


At first, there was pain. A lot of it. But over time, the physical pain fainted, along with my senses. I went numb to everything around me. I became Their puppet. I had no control over my own body, other than occasional tics and twitches. They pretended to be me, acting everything I usually did, but it was all just a game of pretend. Was it panic? Fear? I don’t even know what I felt. I couldn’t see, I couldn’t feel… I didn’t know what They were doing with my body.
I don’t know how often, but I know I walked through my neighborhood. The first time it happened, people talked to me, to Them. Everything was normal. I looked normal.
How long was it since I talked to somebody?
The only thing I wanted was to get Them out, but there was no way. Not if They were in control. They weren’t just inside of me, They were me. The last time I saw myself in the mirror, I looked… dead. I was dead.
At least I should be. My insides were robot parts and wires after all.
People started to avoid me too. And I shouldn’t blame them. I’d avoid someone like myself back then too.

I woke up one day.
I don’t how.
And I felt… different. I tried to figure out what was going on. From what I could see… that was it. My vision was back. Was that a good thing? What was happening to me? I didn’t know.
I looked around. It was a cloudy day, matching the empty street. Where was everybody? Oh, yeah, peeking through their windows. I felt like… I wasn’t human. Their stares weren’t just scared. There was disgust. I wanted to shout something. Anything. Let out my rage. It wasn’t my fault that I turned into what I was, was it? I took a step back and realized I could move. Hardly, though. A sudden wave of panic took over, but I managed to remain calm. I took a deep breath and felt a sharp pain in my chest. My heart skipped a beat. At least it would’ve if it existed.
Why was it happening? That was the question They must’ve asked Themselves too. I felt the control being taken from me again, but this time, I didn’t give in. I was going to fight for my life.

but I was scared

I dropped to my hands and knees. I was going to find a way to get Them out. I was shaking already.
I didn’t expect the result, though. They seemed to notice that I was done. I wasn’t good enough, I didn’t serve as a disguise anymore. I could feel the wires moving in my guts, trying to get out. Right? I didn’t care, I was going to do my own. I knew for a fact they didn’t use my eyes to see, and I was right. My right eye wasn’t really mine. I couldn’t feel it anyways, so I clawed it out. I knew my face was going to be ruined, but I didn’t stop until I pulled the eyeball out of its socket. Until I felt everything else going up my throat. Until I could pull it all out of me. I didn’t stop until I could see all of Their eyes in the pile of metal junk on the sidewalk.
They disappeared in the sewer. They were gone.

I was left alone on the sidewalk, shaking. I could feel the people’s stares. I stood up, only to fall down again. Kind of like every other time I tried to do anything at all.
I wanted to go away. To escape. To end my suffering.

But I couldn’t. And just like that, I drifted back into the unconsciousness. 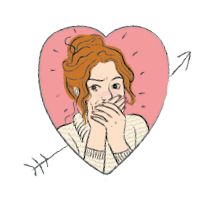 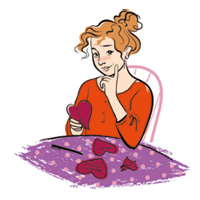 GinnyCat
It's the most wonderful time of the year 3. del

Glasbenica je odgovoril/a na
It's the most wonderful time of the year 3. del

Loona_Lovegod je odgovoril/a na
🎄 All I want for christmas is you 🎄, 5. del