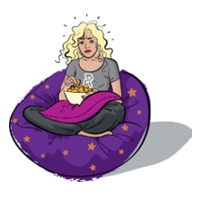 WhoLovesBooksAndMusic
Two small heads were sleeping on the pillows. When you looked at them they were different, but by their nature they were identical even if there were few big differences. The silence was landing on the room like an old friend watching them sleep.

Suddenly their alarm turned on and started bipping as loud as it could to wake girls up as silence left in promise to come back.

The one on the left jumped up and turned it off, as she saw the other one still peacefully sleeping like nothing happened.

The one awake had short blond wavy hear which ended a little bit lower than her shoulders, with blue eyes which looked like you were lost in ocean. She was thin, short and always positive person.

She looked around and when she saw her cousin still sleeping she bitterly thought: "I know shouting won't help... So what should I do instead?" Her little, smart brains started working and came up with her very own prank.

She smirked and ran in the bathroom which was attached to their bedroom. She came back with bucket full of ice and freezing cold water. It was heavy but girl was strong enough to carry it herself because of her lycanthropy.

She put it next to her cousin's bed and took her arm. She slowly, second by second lower, started pulling it into bucket. When blondie got to her elbow, the other one shot up and pulled her own arm out.

This one had perfectly straight brown hear which were ending right below her elbows and dark warm brown eyes with olive green spots in them. She was thin and tall for her age which was the same age as her cousin's (even though she liked to tell to whoever was willing to listen, that she was four months older than the ocean-eyed girl).

She was firstly in shock but when she saw girl next to her bed with slight smirk she instantly knew what this was all about: it was a revenge from yesterday when she put water bucket on their door and when her innocent cousin opened the door, it fell on her.

She frowned: "Congrats Harmony, you woke me up. Again. Why can't you just let me sleep?!"

"What, no 'thanks Harmony, for waking me up'?" said Harmony with smile, pleased that she'd done it.

Harmony pulled out some leggings and loose shirt with a red heart with devil's horns and tail printed on it.

Melody then pulled out of her drawer black jeans and light pink hoodie. She threw the hoodie over her head and pulled the jeans up.

By accident her eyes flickered past the clock and when she looked twice and noticed the time, her eyes widened.

"We are going to miss breakfast!" she gasped while Harmony's eyes grew huge as well.

"Oh shit!" they said in sync and ran out of room right after Harmony stopped at the door to check that there wasn't any bucket of water hanging on the door.

They hurried downstairs from first floor to the kitchen were their parents and both sisters were already eating.

"We are soooo sorry, we hadn't payed any attention to the time," said Melody gasping for air because of running as they both sited down on their chairs from them unknown type of wood. Table was also from the same type.

Their amused mother looked at Harmony: "Melody slept in, didn't she?"

Hollywood, love and he is mine 2. del